This is Jim Butcher at his best, drawing a fully realized, richly detailed, and downright fun literary world where fearless aeronauts ride the aether, brilliant wizards struggle with doorknobs, and a thirty-pound feline warrior keeps a pet human named Little Mouse. It's steam-punk meets magic with a dose of sci-fi for seasoning. Buy it and read it. You'll be glad you did!
New York Times bestselling author David Weber
Wow. Just wow. Beware fellow readers, herein lies adventure that will keep you from food or rest . . . Butcher proves yet again that he is an amazing storyteller
#1 New York Times bestselling author Patricia Briggs
Great action scenes, a fascinating world, and characters of a sort I've never seen before. This is everything I've come to expect from Jim Butcher, but in a delightful new flavour
Patrick Rothfuss, author of THE NAME OF THE WIND 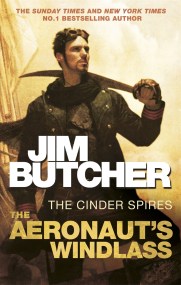