Evocative, researched to the inch and a truly different take on one of history's villains . . . All through this I am seeing Al Pacino in The Godfather, slowly stained darker and darker by power and blood
Robert Low, author of The Oathsworn series
Simon Turney brings an authentic, intriguing - and above all, fresh - new eye to one of the best-known names in the Roman world. Caligula has long been reviled as a weak, petty tyrant. In Turney's capable hands, we see the human behind the myth: a complex man brought down by the exigencies of the office, but who could, with more luck, have been one of the great Emperors of history. This is a cracking book, alive with the sights and sounds of an ancient Rome brought vividly to life by one of the rising stars of the genre. I read it in one sitting, and you can't say better than that
Manda Scott, author of the Boudica series
Enthralling and original, brutal and lyrical by turns. With powerful imagery and carefully considered history Simon Turney provides a credible alternative to the Caligula myth that will have the reader questioning everything they believe they know about the period
Anthony Riches, author of the Empire series
An inspired new take on Caligula that combines the pace of a thriller with the grand sweep of a tragedy - a gripping read that echoes in the memory long after the last page is turned
Ruth Downie, author of the Medicus series
A harrowing and visceral tale that draws you into the pulsing heart of Ancient Rome
Gordon Doherty, author of the Legionary series
In this compelling ancient-world saga, Turney skilfully reimagines the life of history's most reviled emperor. Told from the eyes of Caligula's clever and devoted sister, it's a fascinating, fast-paced, page-turner!
Stephanie Dray, NYT bestselling author of LILY OF THE NILE
Caligula as you've never seen him before! In this exciting new tale from Simon Turney, the much-maligned emperor of Rome steps forward not as a maddened psychopath, but as a brave and tormented young man struggling to navigate the snake-pit that is his own Imperial family. A powerfully moving read from one of the best ancient world authors in the business
Kate Quinn, USA today bestselling author of THE ALICE NETWORK and MISTRESS OF ROME
A close and intimate portrait of a young man's rise to power in a murderously dangerous society, and his vertiginous descent into vindictive rage and excess. Compelling, claustrophobic, and utterly convincing, this is a story of gilded lives on the edge of a precipice
Ian Ross, author of WAR AT THE EDGE OF THE WORLD
This exuberant take on one of the great monsters of history is exhilarating in its revisionist energy; Simon Turney is a truly cherishable talent
Barry Forshaw
This is a masterpiece of historical fiction. I've always considered Caligula to be the mad, incestuous tyrant we are always led to believe he was, so I struggled to see how Turney could turn this around and paint him as human. But it does it so well
NetGalley reviewer
Turney weaves a tale that shows Caligula as a real, flawed human being, thrust into a life that so vary rarely ends well. His pains are real. And even as he slowly descends into a form of madness that was inescapable, and towards a fate that we already know, I found myself rooting for old little boots. Its a sad tale, beautifully told by a master storyteller
NetGalley reviewer
Brilliant . . . a gripping gallop of a read, impeccably researched, beautifully written, impossible to put down
Angus Donald, author of the Outlaw Chronicles
Caligula is a monster we all know and love to hate. Simon Turney's novel challenges our prejudice and sketches a more understanding view of the Roman emperor . . . Turney's version is an entirely plausible take on the sources. We pity the boy, even as we deplore the insane violence of the man. Caligula is an engrossing new spin on a well-known tale
Antonia Senior, The Times
Superbly researched and elegantly written. A powerful and original narrative that should appeal to his existing fans and win him many more
Nick Brown, author of the Agent of Rome series
Inspired . . . a mesmerising, haunting and disturbing portrait of Caligula
Kate Atherton, Sunday Express S Mag
Turney's masterful, persuasive writing makes you start to question everything you have ever read about Rome's most tyrannical ruler . . . Finding humanity and redeeming qualities in one of history's most reviled villains is a bold move, but in Turney's hands, it pays off
Helena Gumley-Mason, The Lady
Gripping, emotional, and authentic. The best Roman novel I've read in a long time. Simon Turney is one of the best historical novelists out there.
Christian Cameron, author of KILLER OF MEN
In Caligula Simon Turney uses fiction to challenge some of [the] lies that masquerade under the name of "history" . . . [His narrator, Livilla] provides an energetic and intelligent eyewitness view of the imperial court and of the gradual decline of Caligula's rule . . . A satisfyingly alternative look at Caligula, something perhaps done better in fiction than in academic history . . . Great and enjoyable
Mary Beard, TLS 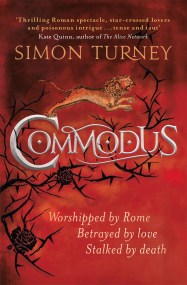