It's like David Eddings, Margaret Weis, Tracey Hickman and Terry Brooks had a brainstorming session over a power lunch... then Wooding stole their notes, drank their beer and set about skewing everything. ...great fun, a classic epic fantasy.
WERTZONE
A well-written tale of revolution, dark magic, and a quest for an ancient game-changing artifact set in a well-built and well-realised epic fantasy world.
THE BOOK BAG
The Ember Blade is everything I could possibly want in an epic fantasy novel, and so much more. Buy this book as soon as it is available.
FANTASY BOOK REVIEW
From the excellent characterizations to the relentless chase, from breathtaking set pieces to the intricate world-building, everything was written with finesse. It seriously doesn't matter whether you're a fan of classic, epic, or grimdark fantasy (even better if all three), there's a place for you here. The Ember Blade is a book every fantasy fan will feel right at home with, and yet will find new adventures in it. It's a book that fantasy readers will love to revisit and inhabit longer and longer with every visit.
NOVEL NOTIONS
If you like Brandon Sanderson you'll love this. The best epic fantasy for years.
Gavin Smith, author of The Bastard Legion
The Ember Blade is hands down the best fantasy novel I've ever read.
Grimdark Magazine 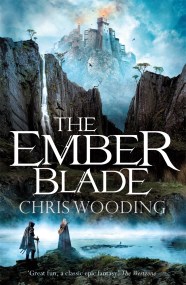