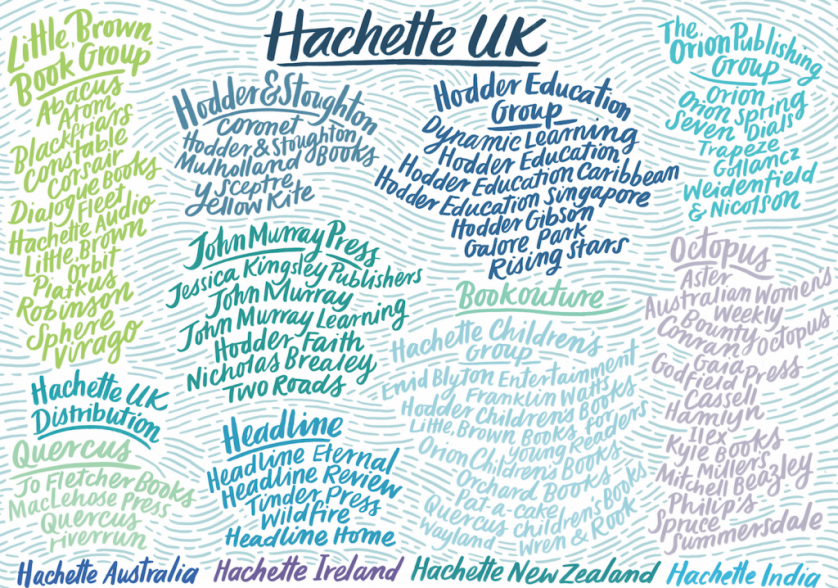 Hachette UK is a leading UK publishing group. The group is made up of ten autonomous publishing divisions and over fifty imprints with a rich and diverse history. Hachette UK is owned by Hachette Livre, the world’s second largest trade and educational publisher, and also has subsidiaries in Australia, New Zealand, Ireland and India as well as working closely with our sister company in the USA, Hachette Book Group.

Our publishers Headline, Hodder & Stoughton, John Murray Press, Quercus, Bookouture, Little, Brown and Orion publish award-winning fiction and non-fiction; Hachette Children’s Group publishes a wide and vibrant range of books for children across many age ranges. Octopus publishes a distinctive array of illustrated books under a variety of imprints including the well-known Philip’s maps & globes, and Hodder Education is a market leader in resources for both primary and secondary schools. Hachette UK Distribution provides distribution services to all Hachette publishers and a number of third party clients.

Our publishing companies operate largely autonomously with certain functions – IT, HR, Finance, Communications, International Sales, Consumer Insight and Digital Support – provided at group level.  This enables us to be both big and small: our publishers maintain their own very strong identities with dedicated editorial, sales, marketing, consumer insight and production teams supported – and given additional muscle where required – by the group. We are structured so that the creativity, independent spirit, diversity and innovation of our publishers thrives, underpinned by the international reach and influence of the Hachette Group worldwide.

Find out more about our Key Staff.

Find out more about our commitment to Diversity and Inclusion.

If you’re looking for a particular book published by Hachette, please visit the website of the publishing division using the links below.