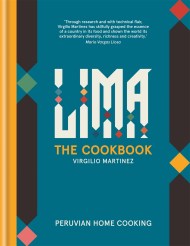 The growing popularity of Peruvian cuisine throughout the world has made Lima, the capital of Peru, a destination city for food lovers. Virgilio Martinez is…