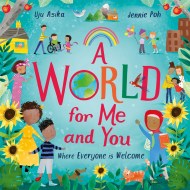 A World For Me and You

In this uplifting picture book, you imagine a world where everyone looks identical, where all food tastes the same, where we all speak the same…