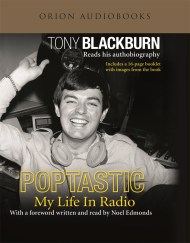 Tony Blackburn is probably one of the most recognisable disc jockeys working in Britain today, and is always busy doing what he does best -…