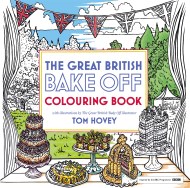 The official colouring book from The Great British Bake Off and a must-have for amateur baking fans, cake lovers and Bake Off enthusiasts! Colour your…