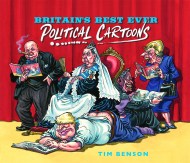 A rip-roaring collection of Britain's finest political satire, from Hogarth and Gillray to Martin Rowson, Steve Bell, Peter Brookes and Nicola Jennings. Between Waterloo and…