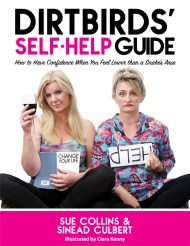 If making the school lunches, doing the Jaysus homework and dodging the guards because of your long-overdue NCT is sending you over the edge, you…