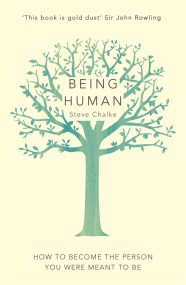 'Your life is precious - a precious gift. It is sacred; every moment of it. The opportunity to live rather than sleepwalk through our days…