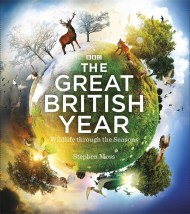 Britain is a place of remarkable beauty and extraordinary extremes, boasting immense natural diversity in a comparatively small area. Here, life is run by the…