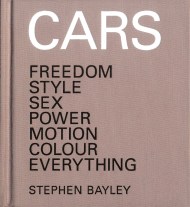 Sources are eclectic, results mixed, but one thing is certain: car design is being forced up an ever tightening spiral of creativity. These machines are…