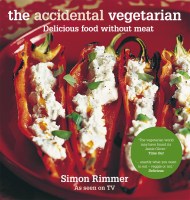 When Simon Rimmer bought a small vegetarian restaurant, he had no idea how to cook. Armed with two cookbooks and heaps of enthusiasm, he and…