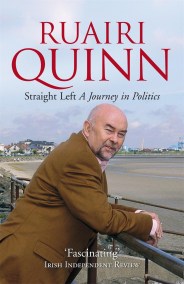 Having spent thirty-five years committed to Irish politics, Ruairi Quinn has now written about his own journey - a journey that has taken him to…