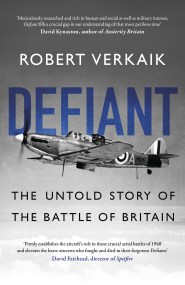 'Meticulously researched and rich in human and social as well as military interest, Defiant fills a crucial gap in our understanding of that most perilous…