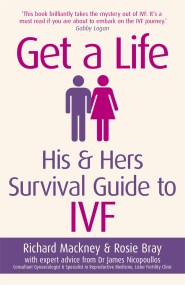 Richard and Rosie started trying to conceive after five years of being together but, two and a half years and countless prenatal vitamins and ovulation…