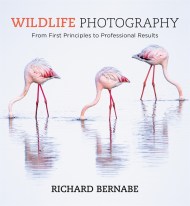 There is nothing quite so satisfying as capturing a stunning wildlife photograph; a good one will reflect practice, patience, careful equipment choice and dedication. Those…