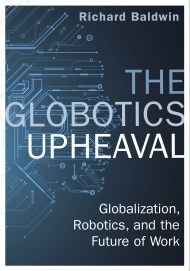 Automation, artificial intelligence and robotics are changing our lives quickly - but digital disruption goes much further than we realize. Richard Baldwin, one of the…