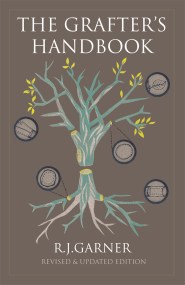 R. J. Garner's The Grafter's Handbook is the classic reference book on plant propagation by grafting and has now been revised and updated for a…