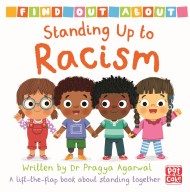 Find Out About: Standing Up to Racism

An introduction to standing up to racism for young children and their families, with flaps to lift It's never too early to teach children to…