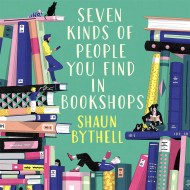 Seven Kinds of People You Find in Bookshops

Everyone knows who you find in bookshops: people who want to buy books. But, as Shaun Bythell, author of the bestselling Diary of a Bookseller…