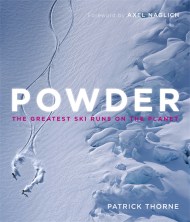 The most impressive, thrilling and scenic ski runs from one of the world's leading ski experts. Long descents, big verts, challenging pistes and stunning scenery,…