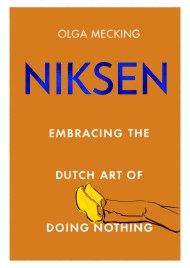 'Niksen is an increasingly popular Dutch relaxation technique where you relinquish control and just ... stop. At a time when meditative practices can feel like…