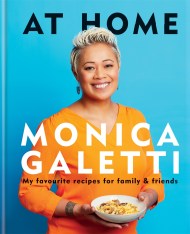 Monica Galetti's career has taken her from her home in Samoa and New Zealand to the professional kitchens of London. Her new cookbook, At Home,…