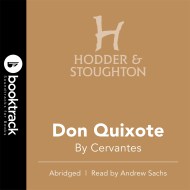 One of the best-loved stories in all of literature, read by Andrew Sachs and featuring an immersive musical soundtrack to enhance your audiobook listening experience!…