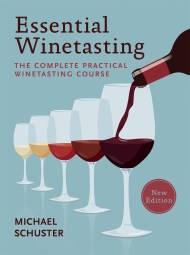 An authoritative and inspirational winetasting course, from one of the world's leading wine educators. 'Explains the mechanics of taste and tasting better than any book…