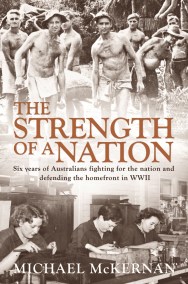 The Strength of a Nation

This comprehensive history of Australia's often overlooked but important role in World War II, in which one million service members from a country with a…