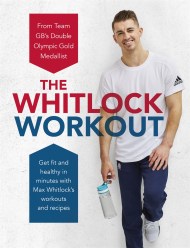 Max Whitlock, Team GB's double Olympic gold-medallist, has spent years developing his own fitness regime and now he wants to share his workout secrets with…