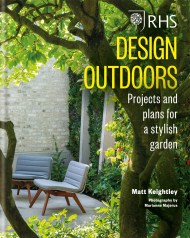 'Designer Matt Keightley's first book is a thing of beauty and a valuable source of design inspiration - a stylish guide to a stylish garden.'…