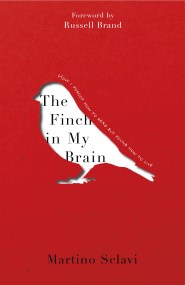 The Finch in My Brain

'Whenever I see Martino I am reminded of how little I know about life and death compared to him. How we don't know what is…