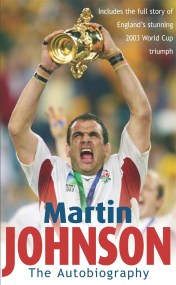 Martin Johnson is the towering second row forward who has come to set the standards of what a professional rugby player should do. His drive…