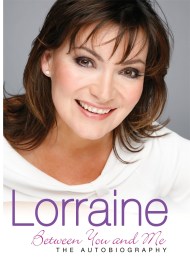 National treasure Lorraine Kelly has been great company for years: a sunny, vivacious and loveable presence in your home. Now it's possible to get to know…