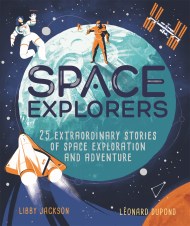 A collection of amazing real-life stories about space exploration and adventure. Do you know the true story of ... *The first astronauts to land on…