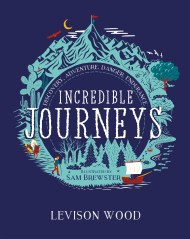 The perfect Christmas gift for aspiring adventurers! Alongside real-life explorer Levison Wood, travel around the world, meet some of history's most daring pioneers, and be…