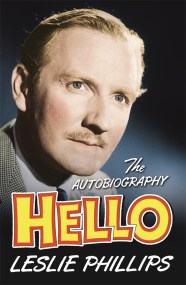 The autobiography of a true national treasure, an actor who has featured in more British Number One box office smashes than anyone else. Leslie Phillips's…