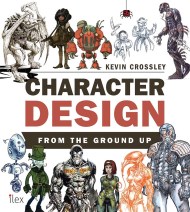 Character Design from the Ground Up

All stories have characters, and whether its a film, game, book, or comic, all characters need to be designed. Character design has become a distinct…