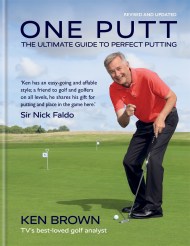 REVISED AND UPDATED! "As well as being a great tool for instruction, it's also a fascinating insight into one of the world's best putters." Tommy…