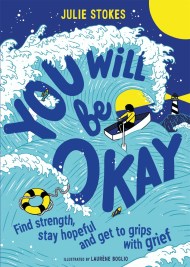 You Will Be Okay

A comforting, practical and go-to expert toolkit for children dealing with loss and grief The death of a parent, sibling or friend is one of…