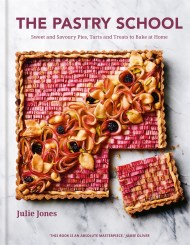 'If you think that Julie Jones's beautiful creations are beyond you, think again. This is as clear and approachable a cookbook as you could wish…