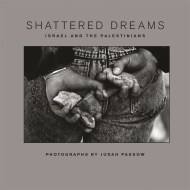 These photographs are more than simply a journalistic record of conflict and turmoil. They are the product of a very personal journey in a place…