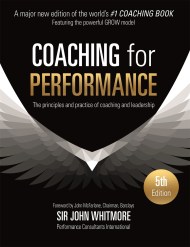 "Coaching for Performance is the proven resource for all coaches and pioneers of the future of coaching." Magdalena N. Mook, CEO, International Coach Federation (ICF)…