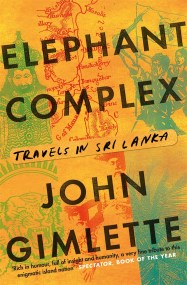 A gripping account of an under-reported island' Spectator, Book of the Year '[A] brilliant new book about an island that has a geography from heaven…