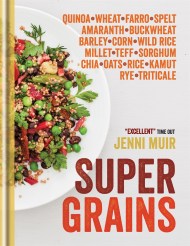 She's produced a wonderful set of recipes, bringing imagination and sparkle to the basic ingredients . . . a wonderful book - The Guardian The…