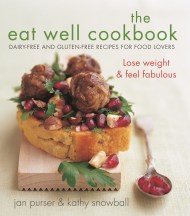 Do you love cooking and eating great food? Do you worry about gaining weight? Do you have or suspect you have food sensitivities? Would you…