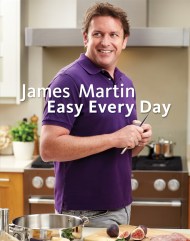 James Martin is renowned for his simple easy-to-follow recipes and comforting, tasty dishes that use the best of British ingredients, but take their inspiration from…