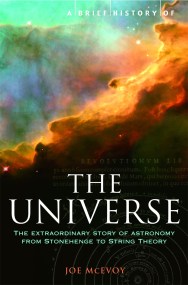 Since the dawn of humanity, men have attempted to divine the nature of the heavens. The first astronomers mapped the movement of the seasons and…