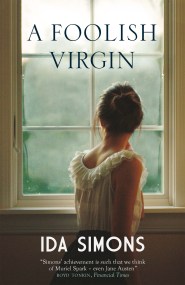 It is the middle of the roaring twenties, and Gittel is living The Hague with her parents, whose blazing rows are the traditional preserve of…