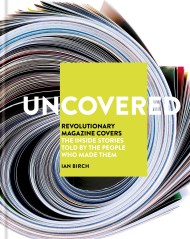 Uncovered is an oral history of the stories behind the most ground-breaking and controversial magazine covers ever published, as told by the people who created…