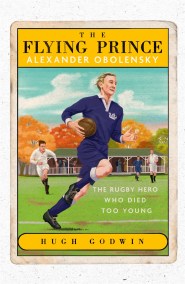 The Flying Prince: Alexander Obolensky: The Rugby Hero Who Died Too Young